CSO has released GDP growth for Q3-FY20 and the 2nd advance estimate for FY20 and both the numbers manifest the slowdown in the Indian economy. India’s GDP grew by 4.7% in Q3-FY20, 0.9% lower than the corresponding quarter a year ago. There has been an upward revision in the quarterly growth of both Q1-FY20 and Q2-FY20 by 60 bps with growth estimated at 5.6% and 5.1% for the respective quarters. GVA growth for Q3-FY20 has been estimated at 4.5%, lower by 1.1% than corresponding quarter a year ago. The GDP growth estimate for Q3-FY20 has been marginally higher than CARE Ratings’ estimate of 4.5%. The 2nd AE of GDP growth for FY20 has been estimated at 5%, which is the lowest since the commencement of the 2011-12 series and is estimated to be almost 1.1% lower from a year ago.

On the sectoral front, the notable decline in GDP growth in Q3-FY20 has been on account of contraction in components like electricity and manufacturing coupled with moderate pick-up in construction activities. However, positive growth in mining and quarrying along with higher government spending has limited the decline in growth. 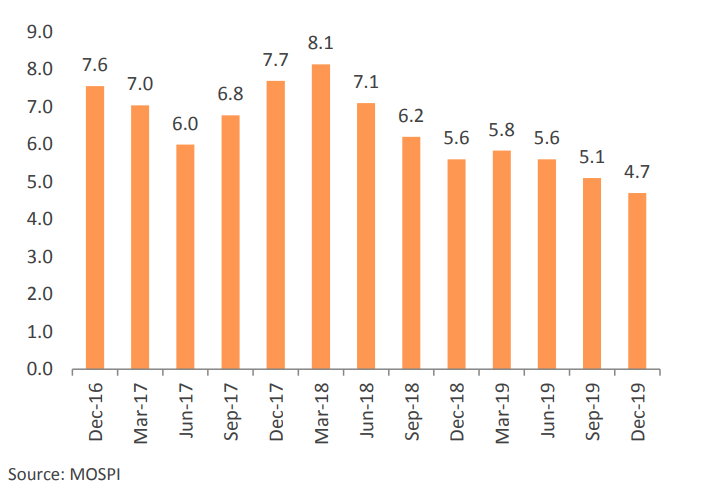 Based on the expenditure method, robust and double digit growth in consumption along with higher government expenditure has driven the overall GDP growth in Q3-FY20. However, contraction in GFCF has limited the upside. 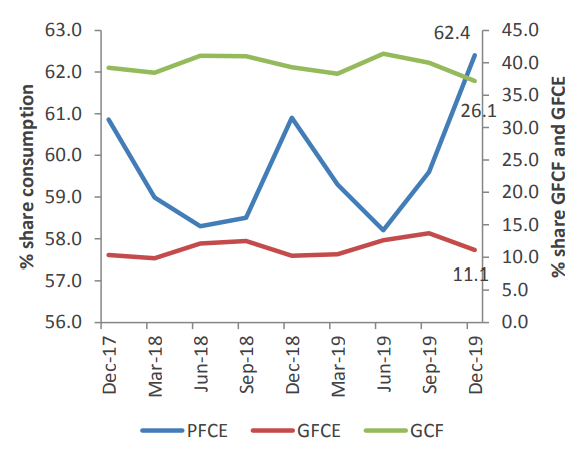 CSO has estimated GDP to grow by 5% for the full year, 1.1% lower from a year ago. Though higher government expenditure has supported the growth for the year, contraction in case of GFCF and exports coupled with moderate growth in consumption has weighed on the overall GDP growth for FY20.

We have retained our GDP growth projections at 5% for FY20 with a downward bias on account of disruption in global supply chains from the outbreak of corona virus seen across the globe.