Retail headline inflation in March 2020 fell to a 4-month low of 5.9%, 0.7% lower from a month ago and 3.1% higher from corresponding month a year ago. Inflation for the month has been notably lower than CARE Ratings’ estimate of 6.5%. It is to be noted that on account of the nationwide lockdown following the spread of COVID-19, fieldwork for price collections had to be suspended and 66% of the price quotations were received while the price behaviour of the remaining price quotations were established based on internationally accepted methodologies.

During the fiscal, headline inflation has breached the upper-limit of the RBI’s inflation target (6%) for 3 months during Dec’19-Feb’20. Even in March’20, headline inflation has been marginally lower than the 6% target. Despite this, the RBI has slashed the policy repo rate by 185 bps from 6.25% in March’19 to 4.4% as of March’20 highlighting lingering concerns to the growth outlook amidst COVID-19 pandemic and projected easing inflationary concerns.

The gap between rural and urban inflation which was wide at more than 2% during the first 5 months of the fiscal has narrowed considerably and in the previous 3 months, it has been noted that rural areas have recorded high inflation vis-à-vis urban areas 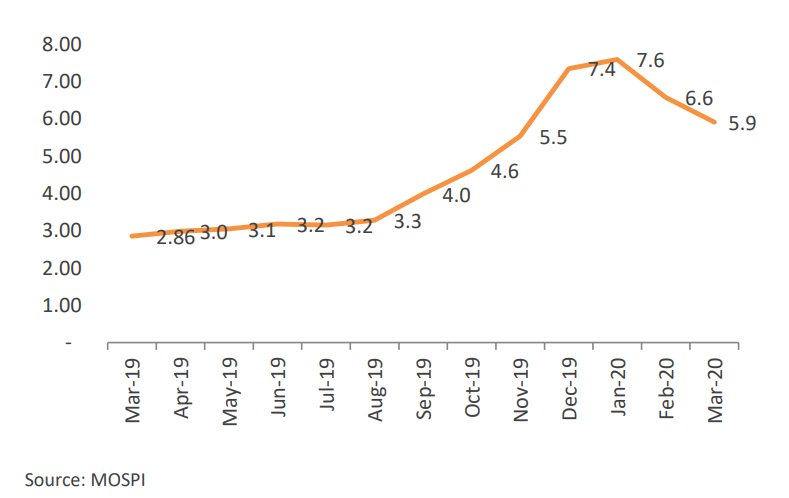 Inflation in housing remained stable at 4.2% from a month ago. However, it was 70 bps lower than that in March 2019.

Miscellaneous items inflation moderated to 4.4%, 10 bps lower than 4.5% a month ago and 130 bps lower than that in March 2019 (5.7%). The moderation was on account of a broad-based fall in inflation from a month ago on all miscellaneous commodities except personal care. Inflation in personal care products at 8.85% has risen to a more than 7 year high.

Food inflation during the year averaged 6.1% during FY20 as against 0.7% a year ago. Most of this upsurge was propelled by spike in vegetable prices owing to unseasonal rainfall (in Nov and Dec’19). However, in H2-FY20, there has been broad-based pricing pressure across commodities like pulses, meat and fish, eggs, cereals and milk. The delayed seasonal easing in vegetable prices has led to moderation in food inflation in Q4-FY20.

Inflation in fuel components remained in deflation during July’19 to Nov’19 but has registered perceptible growth during Jan-Mar’20. Low base effect coupled with increase in the prices of LPG and elevated petrol and diesel prices (despite fall in crude oil prices to record low levels) led to price pressure in the fuel basket in the Q4-FY20.

Inflation in the miscellaneous component declined from 5.1% in April’19 to 3.5% in Oct’19 but has seen a marginal pickup in Q4-FY20. This increase in Q4-FY20 has been on account of pricing pressures seen in case of transportation and communication and personal care products. 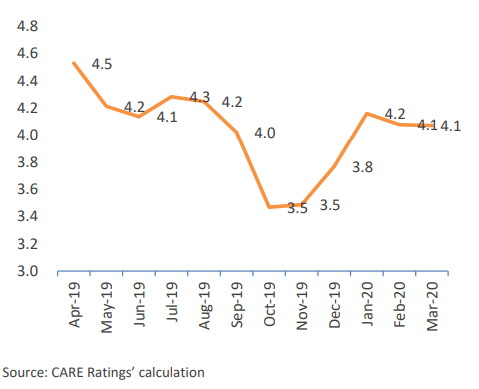 Core inflation in March’20 remained stable at 4.1% just like a month ago but lower than 5% registered in corresponding month a year ago.

Core inflation has remained benign and has averaged 4% during FY20 with a range of 3.5% to 4.5% during the fiscal. Core inflation declined from 4.5% in April’19 to 3.5% in November’19 largely on account of decline in inflation in the education and health segment. A marginal uptick was seen in DecJan’20 and can be ascribed to pick-up in mobile telephone charges (following increase in tariffs of major private players), bus fares and administered railway fares which pushed up inflation in transport and communication segment.

The RBI slashed policy repo rates by 1.1% during March’19 to October’19 on slowdown concerns in the domestic economy and with retail inflation remaining lower than its median inflation target of 4%

The RBI slashed policy repo rates by 1.1% during March’19 to October’19 on slowdown concerns in the domestic economy and with retail inflation remaining lower than its median inflation target of 4%

Despite persisting inflationary concerns, the repo rate was slashed by 75 bps in March’20 on the back of the novel coronavirus pandemic and its likely adverse impact on the domestic impact. The RBI has projected moderation in food inflation and benign core inflation.

We expect the retail headline inflation to remain at elevated levels in the coming few months with likely higher food inflation owing to the extension of the nation-wide lockdown till 30th April which could adversely impact the food supply chains. Despite international crude oil prices remaining at benign levels, the taxes on petrol and diesel commodities could keep the prices of the commodities at elevated levels. Fuel inflation could be higher also on account of a low base effect. However, core inflation would remain benign in the months ahead