Industrial output for the month of January, 2020 rose to a 6-month high of 2%, higher than 1.6% growth registered in the corresponding month a year ago and a contraction of 0.3% in December, 2019. CARE Ratings’ had estimated IIP growth of 2.4% for the month. The overall growth in industrial production during the month can be attributed to low base effect amidst broad-based growth across all 3 categories of the IIP index.

Based on the economic activity, manufacturing sector, which accounts for almost 3/4th of the total index, registered a positive growth as against a contraction in the previous month. Also, growth in the electricity component was at a 6-month high.

During the first 10 months of fiscal year 2019-20, the IIP grew at a lacklustre pace of 0.5% compared with the 4.4% growth in the corresponding period last year. 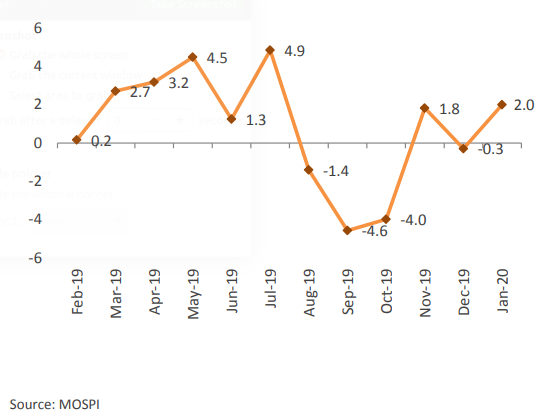 Mining and quarrying registered a growth of 4.4% in January, 2020, higher than 3.8% growth recorded in corresponding month a year ago. This has largely been on account of higher coal production during the month.

The manufacturing sector grew by 1.5% in January, 2020 as against a contraction of -1.2% in December, 2019. The moderate pick-up in this segment does show a recovery from a month ago but reflects an overall weakness in the demand conditions in the economy.

After declining for 5 consecutive months, electricity production rose to a 6-month high growing by 3.1% in January, 2020 and part of this growth can be ascribed to a low base effect.

Within the used based classification, barring intermediate goods and primary goods, remaining four segments have registered contraction in the industrial output. The contraction in capital goods, consumer durables and nondurables has narrowed from a month ago.

For the consequent 15th month, the output in the capital goods has seen negative growth. Subdued investment climate and slowdown in the motor vehicles, machinery among others have dragged down the output in the segment.

Primary goods, which have the highest weight in the IIP, grew by 1.8% in January, 2020, marginally higher than 1.4% growth recorded in corresponding period a year ago.

Consumer durables contracted for the consistent 8 months and registered de-growth of 4% in January, 2020. Weak demand conditions have weighed on the consumer goods segment.

Infrastructure sector too saw a decline in the industrial output at 2.2%, a sustained contraction for the 6th month in a row.

Within the used based classification, barring double digit growth seen in intermediate goods, balance segments have either recorded a contraction or subdued positive growth.

The contraction in capital goods, construction goods and consumer durables has been the key reason for the lacklustre growth seen in industrial production so far this year.

We expect IIP to grow by 1-2% for the fiscal FY20 which primarily reflects weak demand conditions and subdued investment climate in the economy. A low base effect will support the growth in the industrial production in the remainder 2 months of the year. However, the impact of the coronavirus pandemic on global value chains could hamper production activity and pressure overall IIP growth.